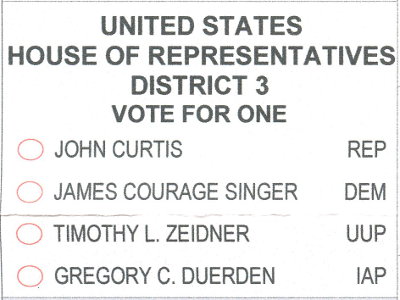 Election Day is Tuesday, November 6. For those of us in Utah, that means our mail-in ballots must be postmarked the day before, or earlier, if we don’t want to visit a polling place in person on Election Day. For further information about polling places and more, see vote.utah.gov.

Before we proceed, here’s a pro tip: Your ballot will not tell you that it is continued on the reverse side, but it might be. Mine is. Don’t forget to check.

Now let’s look at my ballot. Yours is probably different in some ways, but if you’re in Utah, a lot will be the same. I’ll summarize my thoughts on each race and issue. They certainly don’t have to be your thoughts too. Comments are a welcome place for your thoughts here, as always.

I’ll hazard some predictions too, at least for my own entertainment.

Readers have been asking for my thoughts about Thursday’s all-day Senate Judiciary Committee hearing since Thursday morning, when the committee was still questioning Dr. Christine Blasey Ford about her allegation that Judge Brett Kavanaugh sexually assaulted her in high school. I’ve put off everyone who’s asked, until I could finish these notes. (I was hoping for Saturday, but it turns out that I have a life.) Six days later, off we go. I know this is a lot.

First, my starting point: I awoke that morning willing to believe Dr. Ford and to conclude that President Trump should withdraw his Supreme Court nomination. I was also willing to believe Judge Kavanaugh and to declare that the Senate Judiciary Committee and the Senate should just vote already.

The hearing ran through the afternoon. I watched or listened to about half of it live — some of it from my dentist’s chair, and the dental work was a lot less painful. By Friday evening I had watched the rest of it. Parts of it I watched a second time, or even a third or fourth.

This all would have been easier, if I were willing to believe that he is lying simply because he’s a man (and a conservative), and that she is telling the truth simply because she’s a woman. Some folks are wired that way, I guess, but I still see guilt and innocence as individual matters, not a tribal thing.